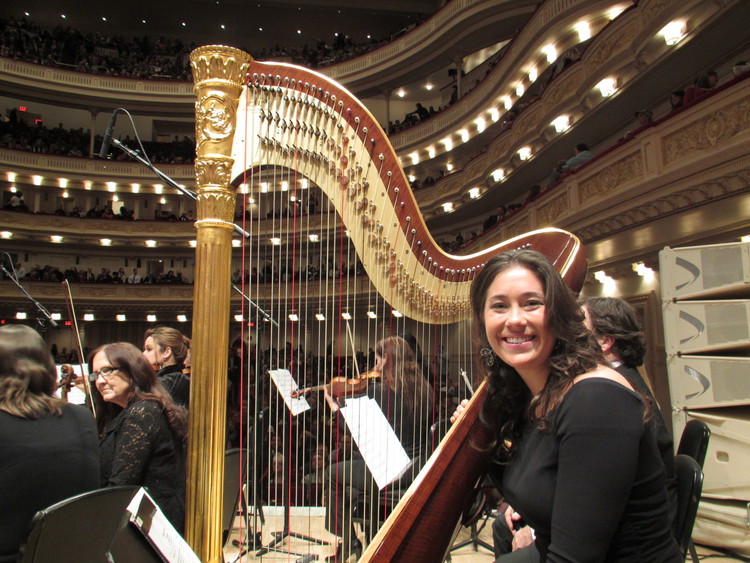 Virtuoso harpist Grace Cloutier Hailed as “an accomplished, poised, self-assured performer” (New York Concert Review) with “breadth of expression and remarkable tone” (Choral Journal), and “scintillating harp wizardry” (Delos Records), virtuoso harpist Grace Cloutier trained at The Juilliard School, Yale University, and in France. She gave her solo Carnegie Hall début recital in 2006, an encore solo recital in 2008, and a “Grace and Friends” concert there in 2014. Grace was a quarter finalist at the Israel International Harp Contest (2001) and has performed for audiences across North America, Europe, and the Middle East, regularly performing for the American Harp Society, the World Harp Congress, the Ukrainian National Music Festival, Carnegie Hall, and in Lincoln Center. She co-founded Ukraine’s International Harp Competition (now entitled Glowing Harp), where she served as head juror of a panel comprised of musicians from Moscow’s Bolshoi Theatre and continues as a guest artist and consultant. As a chamber musician, Grace performs with David Enlow, Jessica Meyer, Sarah Whitney, Laura Metcalf, Rebecca Ringle Kamarei (of The Metropolitan Opera) and co-founded Etherea Vocal Ensemble with its artistic director Derek Greten-Harrison. She has also appeared with Constantine Orbelian and Dmitri Hvorostovsky, the Calder String Quartet, and many others. A dedicated teacher, Grace regularly gives master classes throughout North America and has held multiple residencies at UCLA and served on the faculty at The University of Texas, The Hartt School, Quinnipiac University, and currently is Head of the Harp Department at Trinity College. This summer, she is launching Jamestown Harp, of which she is the Artistic Director, Master Teacher and Co-Founder.