On a sunny Sunday in June that serendipitously fell on Juneteenth, a day we had slated to honor the legacy of two former enslaved people in our own church by installing two Witness Stones, our lectionary felt like a gift from the heavens. As always, there were moments throughout the service in which we were reminded of our Christian mission to love others as ourselves, but Paul’s Letter to the Galatians seemed penned almost particularly for the day at hand. In it, Paul argues that we need to break down barriers and distinctions, recognizing, as he says in chapter 6, verse 2 of the letter that God shows no partiality. (Paul wrote the letter to the Galatians because some of them were listening to a group that was trying to limit and exclude certain types of people from the Christian movement in the first century.) Throughout the writing, Paul is adamant that because we are all equal in the eyes of God, we need to treat each other that way as well. Paul argues for inclusivity and love of neighbor (every neighbor!)—in this letter he reiterates Jesus’ Great Commandment to love our neighbor as ourselves.

This emphasis on inclusivity is behind much of the work of the Resolution 7 Task Force here at St. Paul’s. This task force was put together to carry out the ECCT resolution in 2020 that stated, among other things, that each parish would “take steps to research and document historic complicity in racism in their parish and communities.” In doing our research, with the help of both the Wallingford Historic Preservation Trust and the Witness Stones Project, our goal has been to be more inclusive in understanding a fuller picture of our history as a parish.

We have learned through our work that there were at the very least about a dozen people enslaved by members of our parish, including by one of our rectors. We are taking steps to lift up the lives and labors of those enslaved people, to include them as an important part of the story of our community.

When we first started our research, Grace and Esau, whom we honor today, were our first discoveries because, in fact, they are actually named in the published St. Paul’s history that has been in use for decades! Grace and Esau were enslaved by Titus and Mary Brockett who were significant benefactors of the church in the mid-1700s. Mary outlived her husband Titus, and upon her death in 1777 she granted freedom to Grace. We can presume that Esau already had been freed by that point, as both Grace and Esau were granted a dwelling, some property, a cow, a bed, pots, and more, all of which would revert back to St. Paul’s upon their death. Based on property records found in the Wallingford Town Hall by The Witness Stones Project, we discovered that Esau became a small businessman, buying and trading a number of properties. Grace worked as a spinner and weaver, and she farmed alongside Esau. From census records we can determine that Grace died sometime after 1830 and Esau after 1840.

This is about all we know about these two individuals, and so I wonder about all that we don’t know. What were their lives really like? Were they able to get an education? Even when they were emancipated, what was it like for them to live in Wallingford—where were they welcome, and from where were they excluded? Were they ever allowed inside the church building—a building whose funding was partly made possible by their own labors? And what about their names? Were they given by their parents or by their enslavers? In fact, did they even have the opportunity to get to know their parents?

We will likely never fully know what the lives of Grace and Esau were like, but the parts of their stories that we do know help us understand just a bit more fully the story of our past. By learning more about everyone who contributed to our community, whether directly or indirectly, we develop a more inclusive and complete understanding of who we are. And, even more importantly, by recognizing and acknowledging injustices, whether past or present, we will be motivated to continue to work for a world in which all human beings are treated with dignity and justice. We know there is work to be done. We see it in the national news every day. We see it right here in our own town in the hateful and racist graffiti that was recently painted on our Vietnam War memorial. And we see it in the continued systemic inequities in so many parts of everyday life. Let us pray that our work with the Witness Stones Project and our continued learning will spur us to strive for a world in which there is no partiality so that we can someday live out the vision of unity expressed by Paul…so that, in all of our beautiful difference, we can be one.

All are welcome to join a workshop to learn more about Grace and Esau and about the history of slavery in Connecticut presented by the Witness Stones Project at St. Paul’s Wallingford (65 N. Main St., Wallingford, CT) on November 6 at 4:00 pm. The presentation will be followed by a prayer service. For more information contact the church at 203-269-5050. 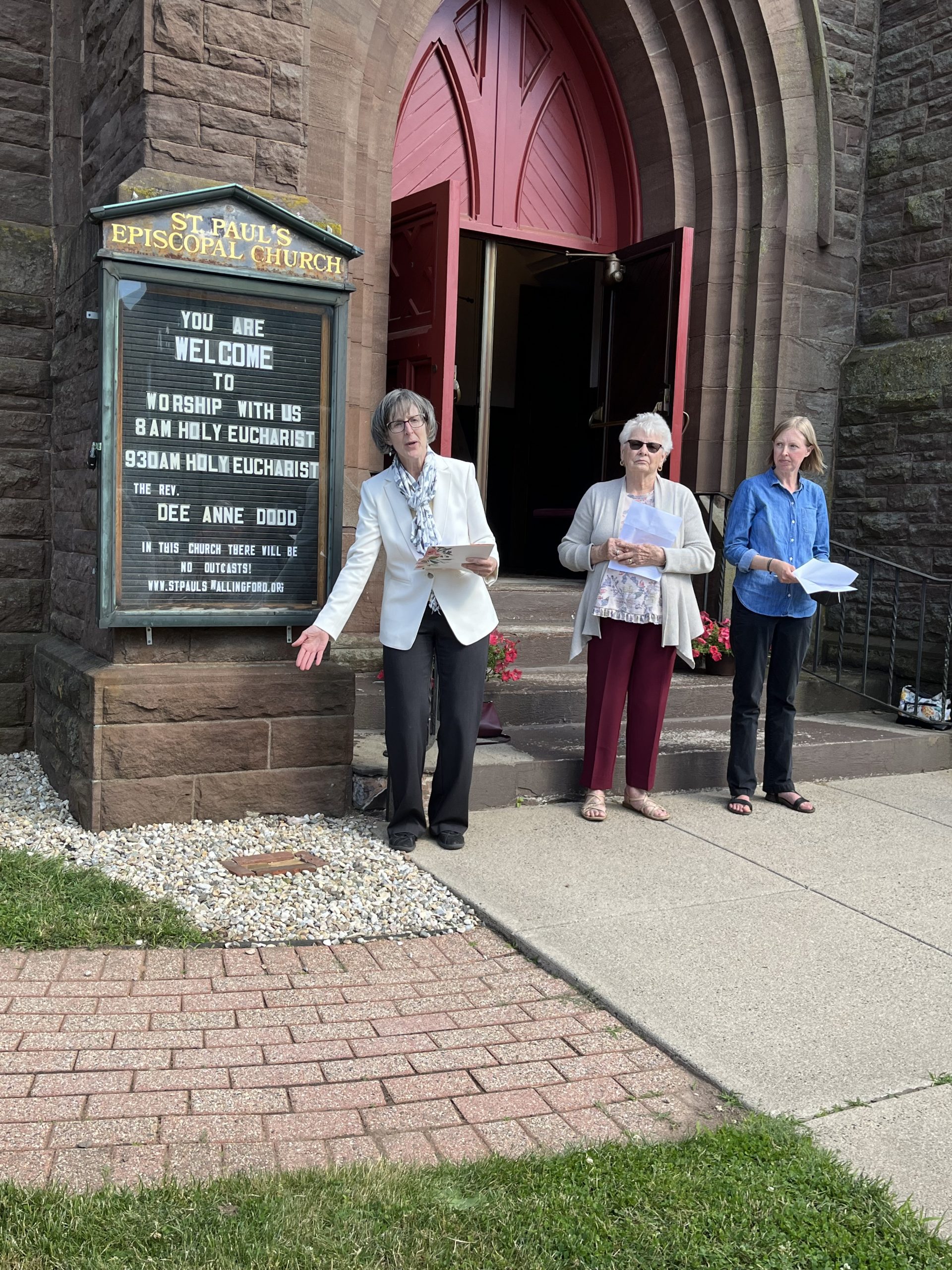 I didn’t want anyone to dismiss me as being performative. Posting publicly on social media is always a bit of a gamble, after all. It felt like a risk to post a photo of me wearing my collar and holding a handmade cardboard sign at a rally in New Haven. 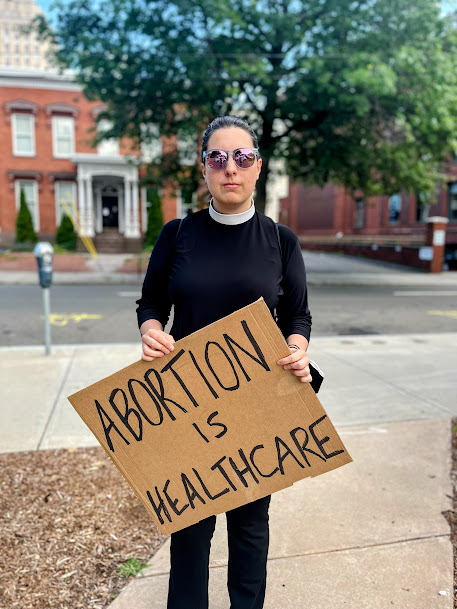 The fourth and final day of legislation is complete in Baltimore at The 80th General Convention of The Episcopal Church. 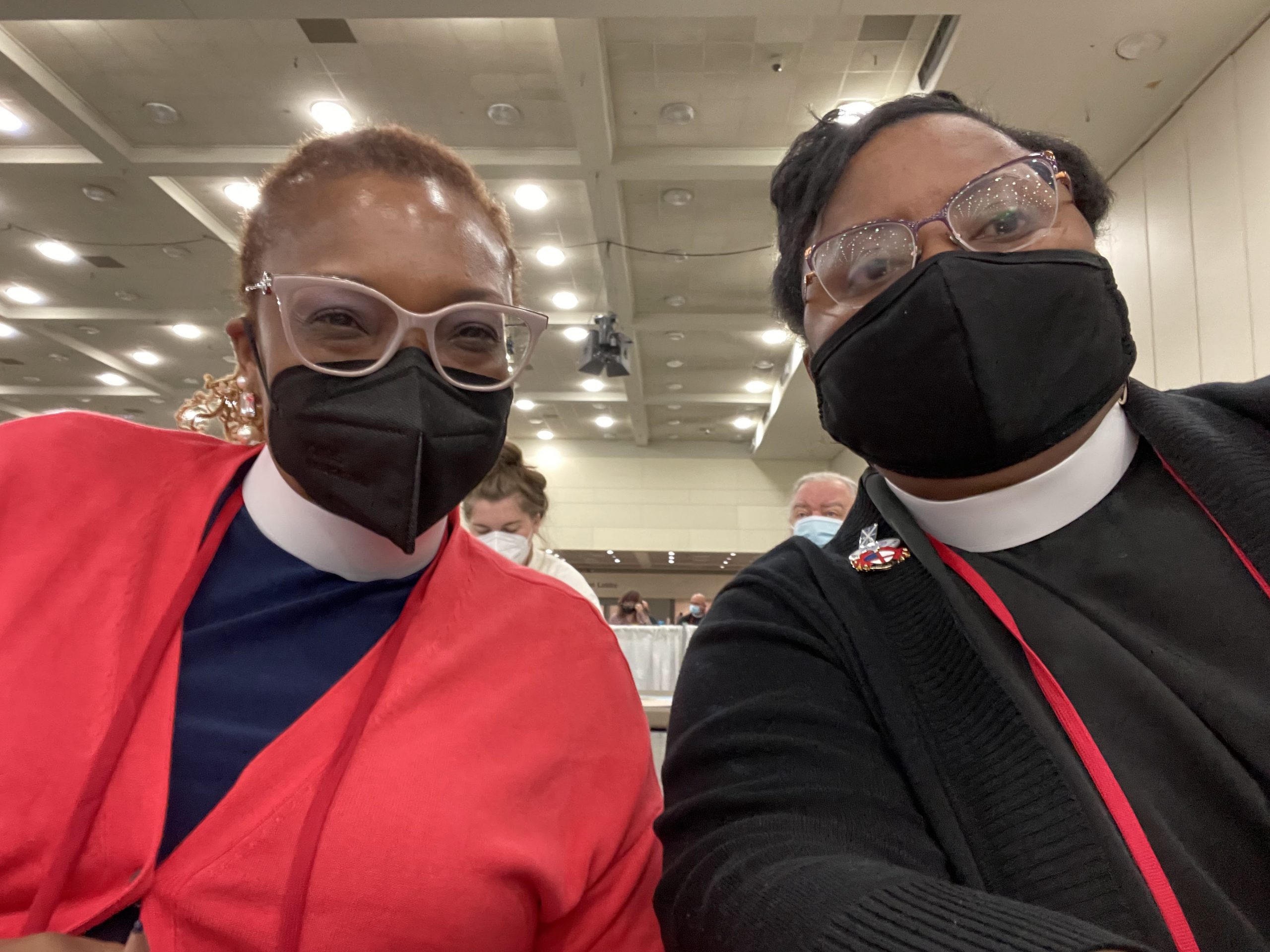 The third day of legislation is complete in Baltimore at The 80th General Convention of The Episcopal Church. Listen to the Rt. Rev. Laura J. Ahrens, the Rev. Canon Ranjit K. Mathews, and Ms. June Aziz as they update us on some of the important work being accomplished at GenCon and the connections (and re-connections) made in Baltimore. 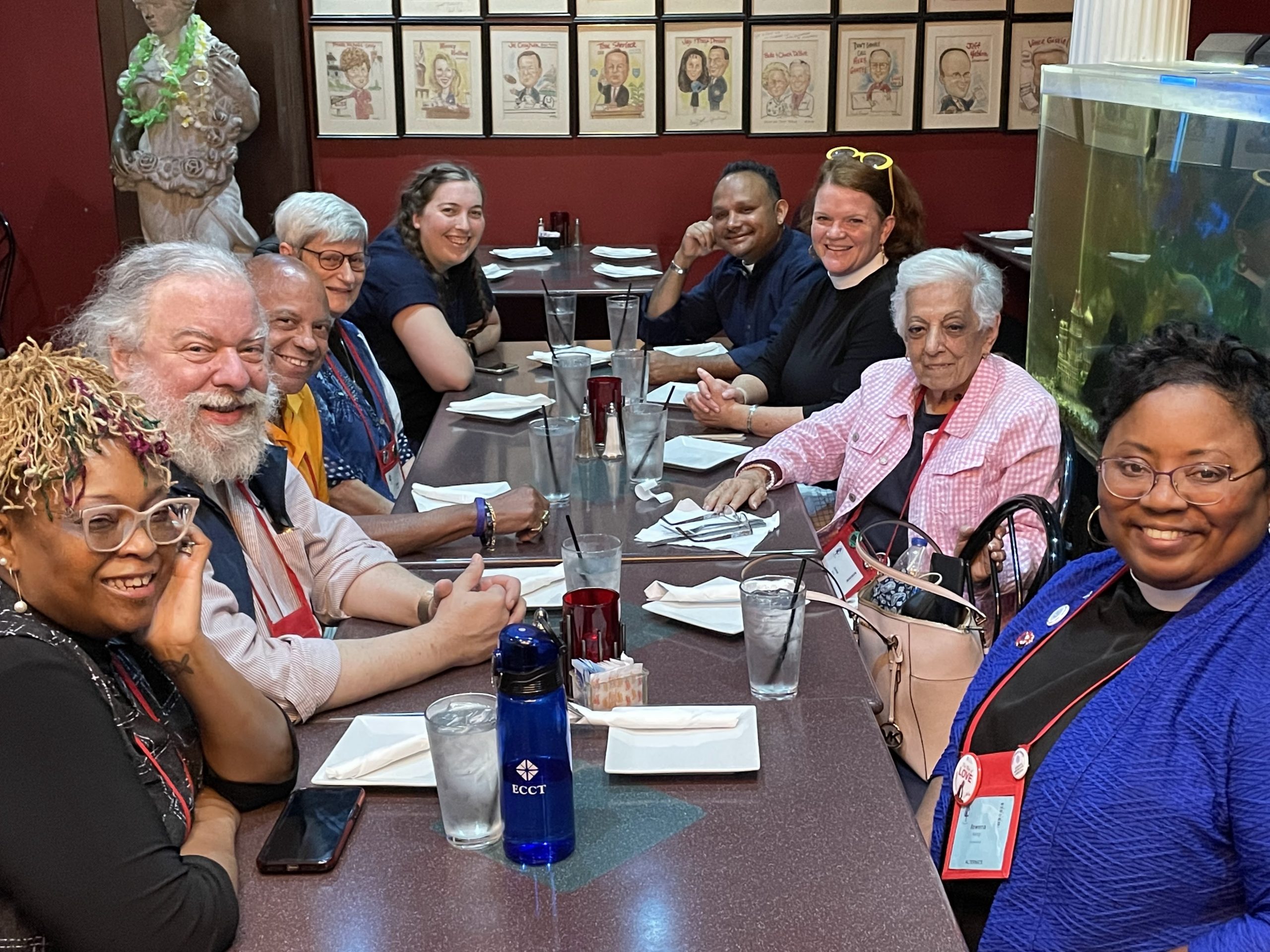 < Back to All Reflections
July 9 General Convention Enews

The second full day of legislation is complete in Baltimore at The 80th General Convention of The Episcopal Church. Listen to the Rt. Rev. Ian T. Douglas, the Rev. Tracy Johnson Russell, and Ms. Elizabeth Rousseau as they give a mid day update and reflections.

Resolutions & Updates noted in the reflection: 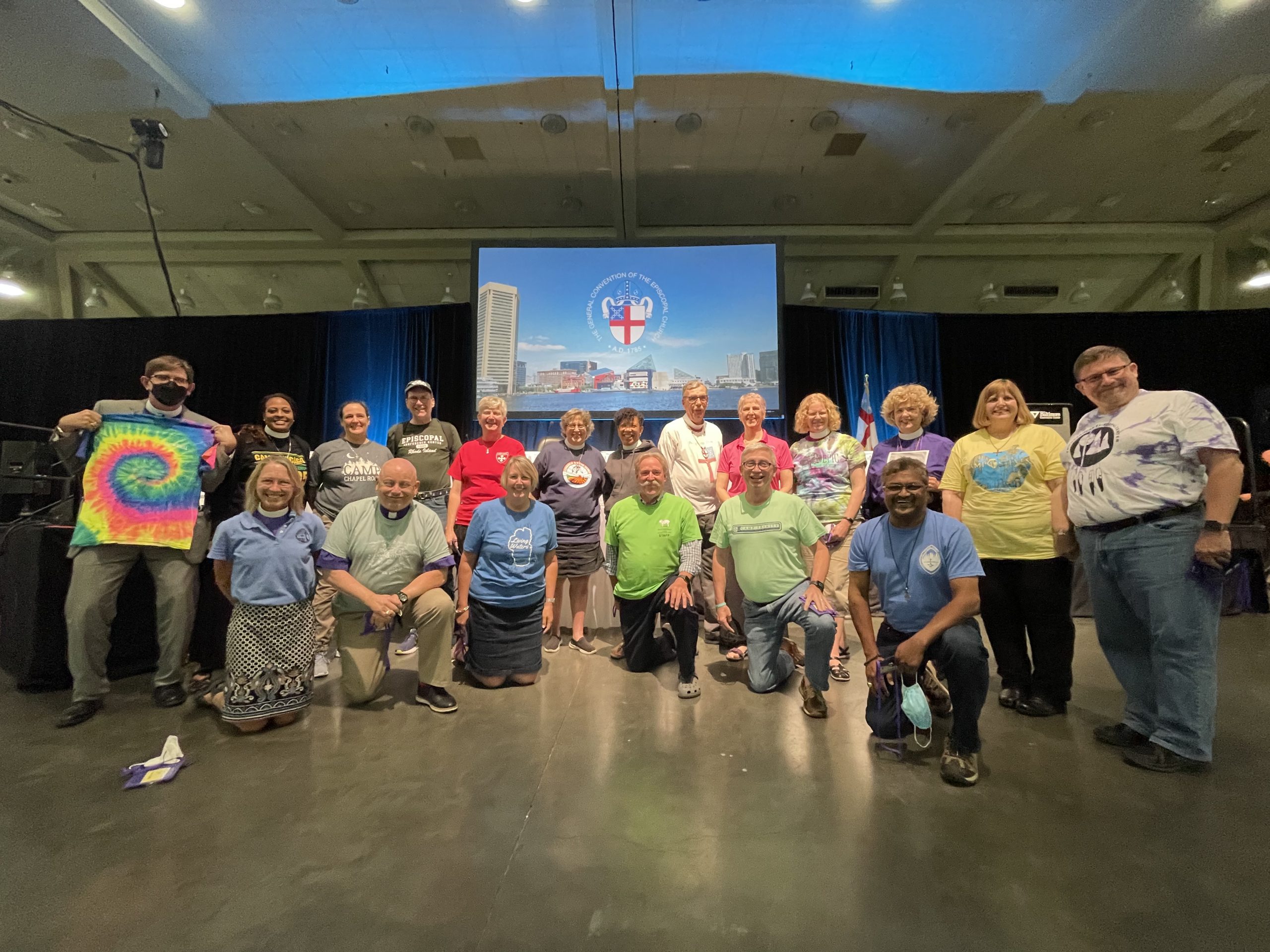 Your ECCT bishops and elected deputies have traveled to Baltimore, Maryland to consider and vote on resolutions that affect our common life. They'll also be voting on new leadership for the House of Deputies, adopt a budget, and amend the Constitution and Canons. We begin with a bit of fun as the deputation gathers Thursday night in Baltimore for dinner. 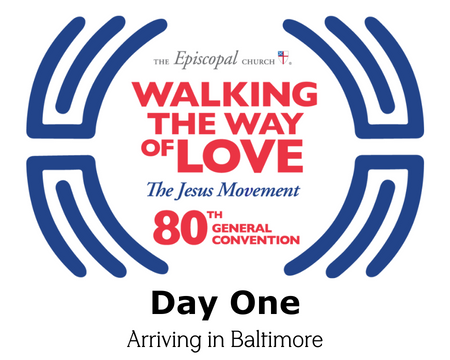 Your ECCT bishops and elected deputies have traveled to Baltimore, Maryland to consider and vote on resolutions that affect our common life. They’ll also be voting on new leadership for the House of Deputies, adopt a budget, and amend the Constitution and Canons. 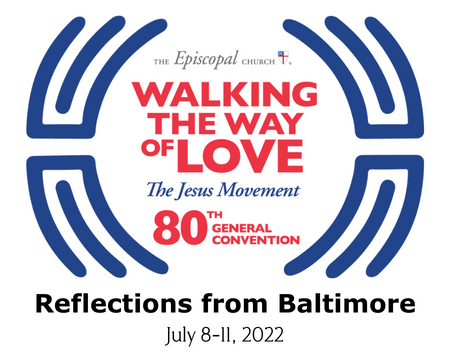 A couple of weeks ago I was cleaning out my books to set up my new study at Trinity Church in Brooklyn, CT and I ran across a book by John McKnight and Peter Block called The Abundant Community. 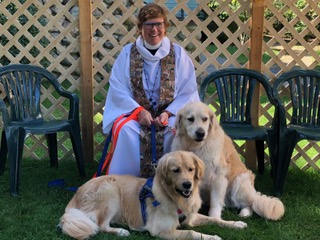 Rest sounds nice when the phone buzzes in the middle of the night. Heart racing, I lift myself out of the cocoon of my warm comforter, rub the sleep from my eyes, and wonder where I put my glasses. 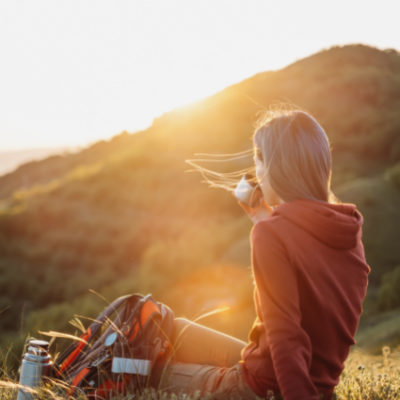 My eyes scanned the faces of the forty or so people gathered, all looking up at the flag pole. With the help of Boy Scout Troop 45, St. Paul’s Episcopal Church in Southington had just raised its first LGBTQIA+ Pride flag.

It flapped freely in the wind, right under our American flag on our front lawn. A few tears pricked my eyes at the sight. I’d been looking at this same flag draped over my couch all week, but flying in the wind was different. It was even better than I’d hoped.

For generations, the church has rejected people based on gender identity or sexuality. In fact, fear and rejection continue to pour out of certain churches today. Still, there are many Christians who believe God made us—all of us—in God’s image (Genesis 1:27) and knit us together in the womb (Psalm 139:13). For this latter group, we have to be just as loud about God’s abundant love as others are about their hatred.

The Pride events we participated in as a parish were overwhelmingly fun. After the flag raising, we attended the Pride Family Fun Day at YMCA Camp Sloper, which bustled with activity despite the rain and 50-degree temperatures. I and my colleague, Pastor Laura Kistharddt, had the pleasure of introducing Ms. Robin Fierce for Drag Queen Story Hour. And, as a recently ordained priest, I had the joy of presiding at the table during our first ever Pride Sunday Worship.

Our church office has been getting phone calls complaining about the flag hung outside our building—usually anonymous, with varying levels of kindness or nastiness. Whatever grief we’ve received, the Southington Pride organization has been far more beleaguered. And yet, the outpouring of love and support from all quarters of the Southington community has been unambiguous: our town loves its LGBTQIA+ residents, especially the children.

It’s like Mary prophesies at the beginning of the Gospel of Luke, when she finds out she’s pregnant with Jesus:

[God] has shown strength with his arm;
he has scattered the proud in the thoughts of their hearts.
He has brought down the powerful from their thrones,
and lifted up the lowly;
he has filled the hungry with good things,
and sent the rich away empty. (Luke 1:51–53)

Mary is telling us where to cast our gaze to find God, and it’s not to the places of wealth and power. God has a special kind of love for the people whom society casts out. In our society, unfortunately, that still includes LGBTQIA+ people.

Putting up the Pride flag was not a way for our parish to check a box or prove anything. Rather, it was a way for us to express who we already are—and to make it clear our welcome really does apply to everyone. Perhaps most importantly, the flag is an indication of our ongoing commitment to ensuring we really are embodying God’s love to every single person who walks in our door.

I didn’t know how many people to expect on that first Friday afternoon. But there, spread across our small lawn, were people of all sexualities and gender identities from St. Paul’s and around town; tearing up, grinning, and praying together. And Jesus’ presence with us was unmistakable.

Other archived ECCT Stories can be found here. 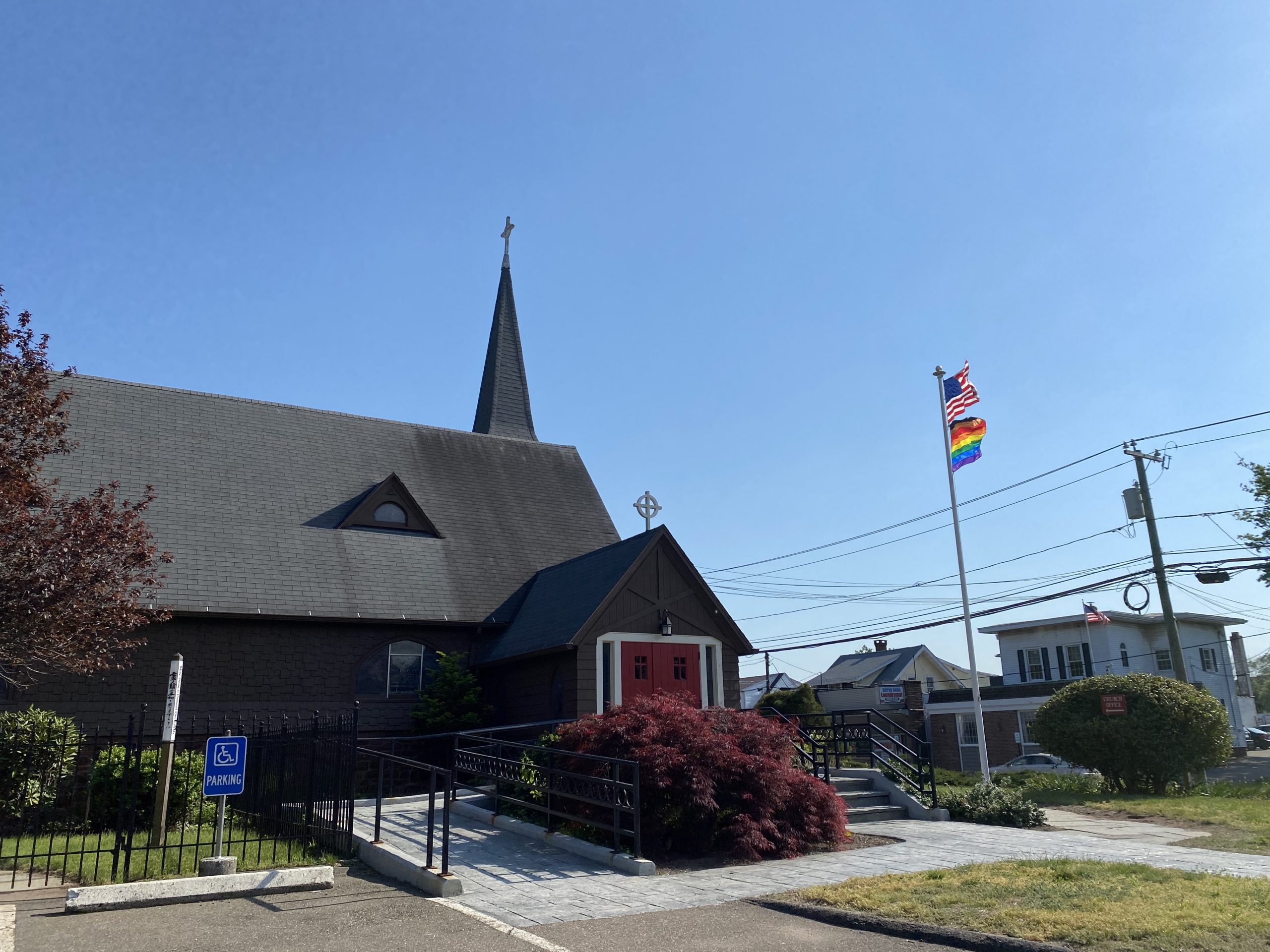